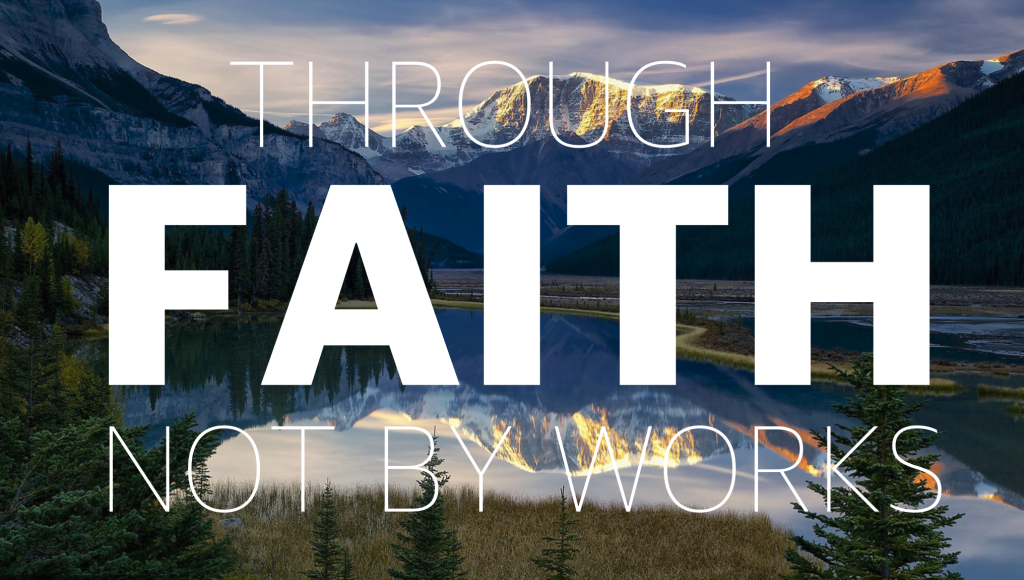 Righteousness Through Faith Not By Works
In his letter to the Galatians, the Apostle Paul wrote a series of questions to the believers in Galatia. He took them back to their experience when they were first converted. Paul brought the Gospel of Jesus Christ to them, and they responded; by the grace of God through faith in Jesus Christ, many were saved. They understood that salvation is a gift of God and not a result of their works.
Later on, many of the people turned their back on these teachings led by the Apostle Paul and they began to follow the teachings of the false apostles known as the Judaizers.
As we approach the third chapter of Galatians, Paul begins with, “O foolish Galatians!” Now that is a strong statement to say to anyone. Paul wrote this out of love toward the people whom he loved; In contrast to how people would use the phrase out of anger and hatred, Paul pleaded with the Galatians to come to their senses. They already got saved by simply believing and accepting the finished work of Jesus Christ; redeemed from the slave market of sin, receiving freedom in Christ – but now, they began to believe in their own works for their salvation.
So, Paul wrote them a series of questions: How were you saved? Was it by keeping the law, performing certain rituals? Is that how you were found righteous in the sight of God? Or was it by your responding to the Gospel through faith? Verse 2, Paul asked, did you receive the Spirit by the works of the Law, or by hearing of faith? What about the work of God began through His Spirit in your life, now you want to perfect it by the flesh? How about the many sufferings you’ve endured as result of being a follower of Jesus Christ, are they now in vain? The powers and gifts flowing through you by the Spirit, were they by works, or was it through faith? The miracles you’ve observed and experienced in your midst, was that a result of your own spirituality or manifestation of your faith in Jesus Christ?
The obvious answer to all these questions was that it was by FAITH and not by works.
Why then would the Galatians now seek to bring themselves to a state of spiritual maturity by their own effort? If all that took place in their midst was done by the Spirit of God, why would they now try to perfect the work of God through the means of their own flesh, through their own effort? Why would they turn their back upon Jesus from what He had done for them and now embrace a legalistic system that could not save and perfect them?
One answer, legalism appeals to the flesh. Flesh desires some sense of satisfaction, accomplishment. “I want to have some part in the process.” Or “If I do this, or do that, then God must do this.” “If I give this much, if I do that ministry, then God must bless me.” Certainly, the Lord will bless His children regardless, but not based on our own works or efforts.
In Paul’s letter to the Philippians, he writes, “If someone else thinks they have reasons to put confidence in the flesh, I have more: Circumcised on the eight day, of the people of Israel, of the tribe of Benjamin, a Hebrew of Hebrews in regard to the law, a Pharisee as for zeal, persecuting the church as for righteousness based on the law, faultless. But whatever were gains to me I now consider loss for the sake of Christ. What is more, I consider everything a loss because of the surpassing worth of knowing Christ my Lord, for whose sake I have lost all things. I consider them garbage, that I may gain Christ and be found in Him, not having a righteousness of my own that comes from the law, but that which is through faith is Christ, the righteousness that comes from God on the basis of faith.”
In closing, let me take you back to Galatians 2:21. The Apostle Paul says, “I do not set aside the grace of God; for if righteousness comes through the law, then Christ died in vain.” Think about it. Jesus Christ the Son of God, the ever present, all knowing, all powerful, the Creator of the Universe and mankind, who is God Himself, incarnated into flesh, mortal body that subjects to death and willingly accepted the ultimate sacrifice on the cross, if we can justify ourselves by our own efforts and works, why then would He come? If righteousness could be gained through the law, then Christ died in vain.